First race of the year!

Cedro Peak is a very fun and challenging local race put on by a very talented and kind race director Kim King. I ran this race four yrs ago when it was a 45 mile and two years ago when it was converted to a 50k. Last year I had a blast volunteering but I wanted a shot at the course again. 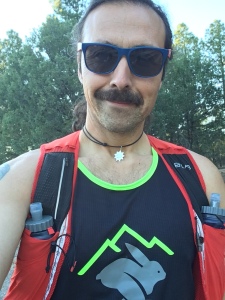 I was feeling pretty confident. I’ve been running consistently if not quite as long as traditional training would dictate. My longest run in recent months was twenty miles but it was solid.

My real concern was that two days prior I was in bed with a fever and chills. I rode it out and broke it in just that one night and returned to work normally the next day. Running 30 miles was probably too much stress just two days later though. 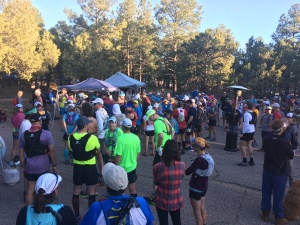 Race started well. It was cool and easy to just cruise a long. I kept a 9 min/mile pace for the first 8 miles without really feeling over-exerted. After that I slowed for the inclines. As always there were beautiful views even if they just showed me how much work I had yet to do.

My last food was at mile 13 AS, after that I couldn’t eat anymore. My stomach was mad. Though I tried to eat, I only succeeded in vomiting twice before deciding to stop. I focused then on hydration and Tailwind. I couldn’t even run without severe dyspepsia so I slowed to a hike between miles 16 and 24. Some intermittent running but not much.

It paid off. I was able to slowly munch on some ginger cookies and eventually down some oranges (still nothing substantial). But I was able to mostly run in the last 8 miles.

While I started on track for a 5.5 hr finish I ended with a 7hr 48 minute finish. The important thing is it was a finish. I was considering dropping at mile 19, when I was in the midst of the nausea and fatigue but I just kept moving. Even managed a (kind of) smile at the end!

What works at your table?

A blog about board games, board game strategy, miniature games, and tabletop RPGs. Love the Game.

How to feel better

Another year, a decade or a lifetime - sooth your body eternally

The One World
The Kind GM

Useful Resources for Your Consideration by an Individual Blogger

Diary of an Aesthete

I know where I'm running
Cooking with a Wallflower
FueledByLOLZ

Running and Laughing through the Golden State